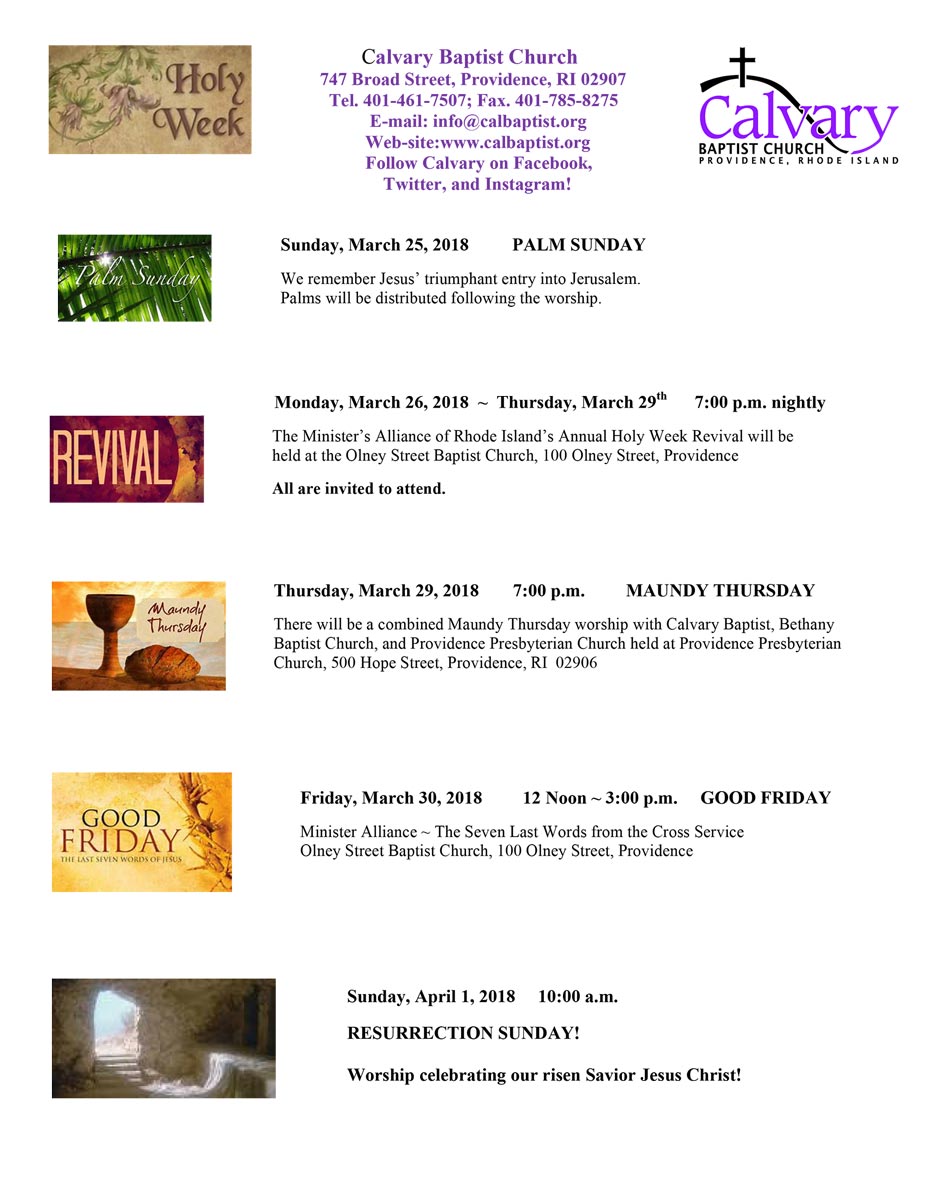 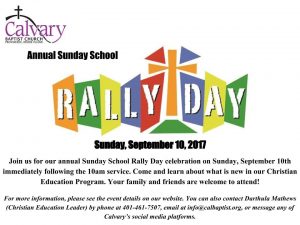 Join us for our annual Sunday School Rally Day celebration on Sunday, September 10th immediately following the 10am service. Come and learn about what is new in our Christian Education Program:

We will also enjoy a potluck style luncheon. Everyone is asked to bring their favorite dish, salad, and/or dessert to share with the church family and friends. No peanut or tree nut ingredients are permitted. Beverages will be provided.  A sign-up sheet will be located on the narthex information table and serving counter in the Tomlin room.

If you have any questions, please contact Darthula Mathews (Christian Education Leader) by phone at 401-461-7507, email at [email protected], or any of Calvary’s social media platforms. 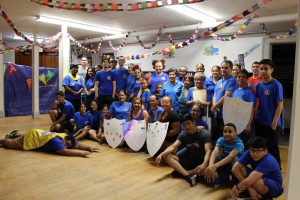 Thank you IBHEC and Calvary volunteers, parents, and children for another great Vacation Bible School (VBS) session.  It was a blessing to see familiar and new faces. Though VBS 2017 – Hero Central has concluded, remember the Hero Code from Psalm 34:14b to “Do good, seek peace, and go after it!” and Hero Pledge to have “heart, courage, wisdom, hope, and power.”

For photos and videos from this year’s session, check out our Facebook page.

Dear Brothers and Sisters in Christ, 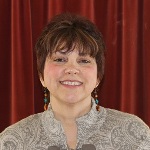 Jesus asked, “What will it profit them if they gain the whole world but forfeit their life? Or what will they give in return for their life?” (Matthew 16:26). He was saying that nothing else can compare with the value of life itself. Christians, especially know this is true, since we believe our spiritual journey will last far beyond our physical journey. We have been entrusted with the assurance that death does not end the gift of life but is the door, to life everlasting. John recorded the assurance that Jesus gave his disciples – and us – as the trial of the crucifixion neared: “In my Father’s house there are many dwelling places. If it were not so, would I have told you that I go to prepare a place for you? And if I go and prepare a place for you, I will come again and will take you to myself, so that where I am, there you may be also? (John 14:2-3)

The essence of God is love, and God’s gift of Christ came from the center of that love. Jesus gave his life because he loved us. If we, as Christians, are to reflect our loving and wonderful God and also our loving, crucified, and resurrected Savior, then should not love be the basis for what we give? This type of giving goes beyond percentages, pledges, tax deductions, and all the other motivations for that are found in our culture and economic systems. It is love that produces sacrificial giving.

First, the tithe is the minimum standard in standard for giving, especially in an affluent society. However, focusing on the tithing only as a strict rule ignores the more stringent demands of giving. Tithing is a starting point of faith that honors God’s faithfulness to us. Second, God’s demands are far greater than the tithe, a 10% “token” of one’s possessions. Third, the tithe, for an affluent Christian, holds no opportunity for sacrifice. The tithe in an affluent society is often reduced to no more than a charitable deduction. Fourth, yes, the tithe talks only about money. However, giving should not be tied only to money.
The essential points to keep in mind with regard to tithing are the following:

Tithing is a discipleship issue not a fund-raising device. It has to do with our relationship to Jesus Christ. The question tithing raises is not “how much of the church’s budget is my share,” but rather, “how much of my income is God’s share.” We have a need to give, and the tithe is a guide in addressing that need.

Giving makes me more like God. “God so loved the world that he gave his only begotten son …” John 3:16 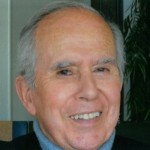 The Rev. Dr. Victor F. Scalise Jr. served as an American Baptist Pastor in Massachusetts from 1960 – 2010. He served for 17 years as the Senior Minister of The Baptist Church & The United Parish in Brookline, MA. Following this ministry; he engages in 17 interim ministries. He was inducted into the Dr. Martin Luther King, Jr. Board of Preachers at Morehouse College, Atlanta, Georgia.

His first wife of 51 years, Mary Love Scalise, died in 2009. He is now married to Carolyn Fowler. They reside is Seattle, Washington. Vic and Carolyn are at their summer residence in Ocean Park, Maine during June and July. 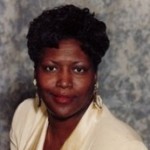 The Reverend Deborah L. Shumake Jáphia is the Senior Pastor of Greater One Ministries in Detroit, MI. She served as the Assistant Pastor of Christian Temple Baptist Church in Detroit, MI until 2009. Pastor Shumake is a talented, productive, and transformational leader in the religious, business, and global communities.

A prolific writer, she has several articles in the Woman of Color Study Bible (where she is categorized among 120 scholars, educators, pastors, and Christian leaders) published 1999, Nia Publishing and World Book Publishing. She is also in the Aspire: The New Women of Color Bible, Published, 2006, Zondervan; She is a featured writer in Sister to Sister, Vol. 2: Devotions for and from African American Women, and Sister to Sister the Journal, Judson Press  both published 2000.

Pastor Shumake believes and teaches that the LORD impregnates each of us with a triune ability in Family, Ministry, and Business to live out our purpose, and thus, in God’s creative energy she has birthed:  Family – Five children: Robert, Severin, Nikita (Jabulani), Norflette (Shenay) and Nehru (Dorcas) who have provided her the opportunity of celebrating 12 awesome grandbabies; Ministry & Business: God’s Woman Magazine, for Women who Love and Serve Jesus Christ, God’s Woman 14 Month Calendar; Play: Sista Girl I Feel Ya: Giving Voice to Our Sisters; Woman of Praise Figurine, The Games Women Play, Especially God’s Women.  The Reverend Deborah L. Shumake is the CEO of GW Publishing Co., God’s Woman Showcase LLC and Ain’t I A Woman Non-Profit, Inc.  At this time, she is pushing to birth the first-ever globally televised God’s Woman Showcase Awards Show.

In 2012, Pastor Shumake was appointed to the position of Executive Administrative Assistant to the Honorary Consul of the Republic of Botswana to the United States, who serves under the direction of Her Excellency Ambassador Tebelelo Seretse.  This provides Pastor Shumake with the opportunity to act as liaison between Botswana and the US. She has been instrumental and/or assisted as:

On March 14, 2013, Rev. Shumake provided assistance in presenting the Side Event:  “Moving Men From Bystanders to Allies” at the United Nations 57th Commission on the Status of Women, Theme: Eradication and Elimination of Violence Against Women and Girls.

The Reverend Deborah L. Shumake is passionate about her love for God and people. She can be reached at: 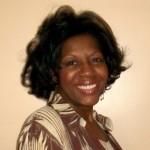 Rev. Dr. Sheryl L.W. Barnes was ordained to Christian ministry in 1998 in Ypsilanti, Michigan with a calling to share the Gospel through gifts of teaching, preaching, and exhortation.  In response to her call she has presented the Word of God in various formats including sermons, adult Bible instruction, youth Sunday School, workshops, retreats, discipleship courses, ministerial and leadership training, mentoring and through publication of books and resources.  Her newest publication is the book: “Discipleship in the Age of Distraction” that describes the devastating effects of distractions in the lives of Christians.

The Lord has used her to teach educational psychology, classical philosophy, ethics, bioethics, and theology courses.  She serves as Chancellor of Veritas Discipleship Academy and is teaching “Out of the Box Bible Study” every Sunday via conference calls.  As a businesswoman, Dr. Barnes is the founder and CEO of Sterling-Xavier Consulting Group, LLC and its subsidiary, Wisdom Word Publications.

Dr. Barnes has served as Staff Clergy at Christian Tabernacle Baptist Church (Hamden, CT), President of Genesis Christian Academy Board of Education; Dean of Faculty at Berean Bible Center; and as a faculty instructor for Ministers-in-Training.  She is available to minister to your faith community, church or organization through preaching or teaching.  Rev. Barnes is married to Min. Linwood E. Barnes and is the mother of one adult son and three adult step-children.

There will be a work day at Calvary on Saturday, June 1, 2013. Come part of the day or all day from 9a.m. to 3p.m. We will have painting projects, organizing of the boiler and utility rooms, clean up of the kitchens and other projects. We will need people to volunteer to supervise some of the projects. Contact Rick Robison at Ph.# 461-5182 if you can supervise or for any questions you may have as a volunteer.

The social committee will serve lunch at noon, which will include some barbecue provided by Calvin Forbes.

Here is a list of projects in order of priorities:

I will have florescent light bulbs on hand and paint, sand paper, cleaning products, rollers and covers for the painting jobs. Bring you favorite painting brushes if you want to paint and buckets and sponges for cleaning.

February 13th is Ash Wednesday, the official start of the Lenten Season. During this sacred time Christians world-wide reflect on Jesus’ crucifixion and resurrection in a special way, for they are central to our Christian faith.  Calvary is offering a special Lenten Bible Study, “Living the Resurrection Reality,” on Wednesdays, Feb.13-Mar. 20, 7:15-8:30 pm at our church.

The Resurrection is too good of news to be limited to only one Sunday a year. This Bible study will look at this phenomenal event in detail. Did Christ’s Resurrection as described in the Scriptures really happen?  Why was His Resurrection “Good News”? What does the Resurrection mean for us today?  In this dynamic Bible Study developed by Christianity Today, we will explore how the Resurrection transforms our lives as it grounds our faith and gives us a glimpse of our life to come.  Each class will be led by a differentCalvary minister and there will be one guest instructor.   All classes will be preceded by Prayer Meeting from 6:30-7:15 pm.

Calvary family, we hope you will participate in this special opportunity to grow in Christ and grow with one another.  Please spread the word!  God bless you!

For over a year, Calvary’s wheelchair lift has been broken, causing accessibility challenges for members and visitors with wheelchairs, walkers and canes. Thanks to a successful winter Capital Campaign, a new lift will be installed by March. The new Genesis Vertical Lift made by Garaventa Lift will provide easy access to Calvary’s main floor and lower level, where South Providence Neighborhood Ministries has offices. The approximately $25,000 project is being supported by an $8,300 grant from the RI Baptist Home Board, $12,060 in pledges from Calvary members,and the balance from our church’s invested funds.

“This lift will benefit anyone who is handicapped” whether they enter our building for church, a funeral, wedding or SPNM, said Rick Robison,Calvary member and Building & Property Ministry Chair. Thank you donors!

For our struggle is not against flesh and blood, but against the rulers, against the powers, against the world forces of this darkness, against the spiritual forces of wickedness in the heavenly places. Therefore, take up the full armor of God, so that you will be able to resist on the evil day, and having done everything, to stand firm. — Ephesians 6:12-13