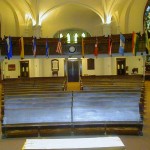 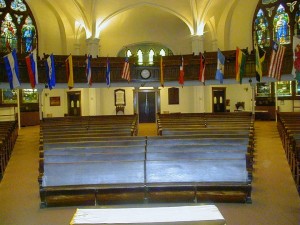 In 2005, after many years of deferred maintenance, surrounded by a leaking roof, crumbling plaster, stained ceilings and walls, and the presence of mold in some areas of the building, our church formed a Capital Campaign Committee.  The job of this committee was to raise enough money to repair and restore our historic building.  The first three-year Campaign was followed immediately by a second, as the pressing building needs exceeded the funds that were raised during the first Campaign.

Over the six-year period of both Campaigns, a total of $262,000 was given by members, former members, and friends ofCalvary.  We received two grants from the Champlin Foundation totaling $253,000.  The Church sold the four unit apartment house that it had owned, the Waterman House, for $162,000.  The Baptist Fund of RI gave us a donation of $4,000.  In 2006 there was an additional appeal to members to repair three badly deteriorating stained glass windows in the Sanctuary which raised $34,320.  Narragansett Improvement Company, owned by the Everson family who were church members from many years ago, generously agreed to completely strip and repave our parking lot; an in-kind donation of $75,000.  Finally, in June of 2006, through the American Baptist Extension Corp., we took on a mortgage in the amount of $327,000.  As of this writing, thanks to the generosity of our members, we have reduced the mortgage amount to $79,000.

Much work has been accomplished in these past seven years.  Early on, we repaired our chimney that had badly cracked and was in danger of falling down.  Next, and by far the largest part of the project, we replaced the deteriorated slate roof over the Temple, and at the same time replaced gutters and flashing, recoated the exterior of the lantern over the Sanctuary, restored three of the stained glass windows, and repaired the remaining existing slate roof and skylight. Once this work was done, the water leaking was stopped, and we began interior repairs.  In the Sanctuary, the plaster walls and columns were completely scraped, plastered, and repainted.  The crumbling archway in the balcony was removed and replaced.  On the exterior of the building, much needed repairs to the masonry and wooden window trim was begun.

Still, much work remains including the following:

While we welcome donations in any amount towards these remaining needs, major gifts are greatly appreciated and could be considered for ‘naming opportunities’.  Donations should be made payable to Calvary Baptist Church Building Fund and mailed to Calvary Baptist Church, 747 Broad Street, Providence, RI 02907.  We deeply appreciate your support of the restoration of our historic church home!

[Song of Praise for God’s Favor] LORD, You are my God; I will exalt You, I will give thanks to Your name; For You have worked wonders, Plans formed long ago, with perfect faithfulness. — Isaiah 25:1